First Solar, Inc. today announced financial results for the fourth quarter and year ended December 31, 2015.
- Record annual net sales of $3.6 billion for 2015. Fourth quarter net sales of $942 million.
- Full year earnings per share of $5.37. Fourth quarter EPS of $1.60.
- Cash and marketable securities of $1.8 billion, net cash of $1.5 billion.
- Maintain 2016 EPS guidance at $4.00 to $4.50.
- Record annual bookings of 3.4GWdc in 2015. 2016 year-to-date bookings of over 160MWdc.
Net sales were $942 million in the quarter, a decrease of $329 million from the third quarter of 2015. The decrease in net sales from the prior quarter was primarily attributable to lower revenue from the Desert Stateline project, which achieved initial revenue recognition in the third quarter. In addition, sales of third party module and module plus offerings decreased.
The Company reported fourth quarter earnings per share of $1.60, compared to $3.41 in the prior quarter. The decrease in net income from the third quarter was due to lower net sales, a decrease in gross margins and higher operating expenses. In the third quarter, gross margins and operating expenses benefited from a decrease in the Company's module collection and recycling obligation. Partially offsetting the decrease in net income versus the prior quarter was a benefit from lower tax expense, which resulted from a favorable mix of jurisdictional income.
Cash and marketable securities at the end of the fourth quarter remained at $1.8 billion. Cash flows from operations were $53 million in the fourth quarter.
"We exit 2015 with record annual revenues, record new bookings and earnings per share of over five dollars," said Jim Hughes, CEO of First Solar. "As we look back to the 2015 targets first provided to investors at our Analyst Day nearly three years ago, we recognize that we have achieved the efficiency, cost per watt and earnings targets outlined at that time. We enter 2016 with tremendous technology, a strong pipeline and an ongoing commitment to achieve the long-term objectives we have communicated to our investors."
The Company maintained 2016 earnings per share guidance of $4.00 to $4.50 and updated forecasted financial items as follows: 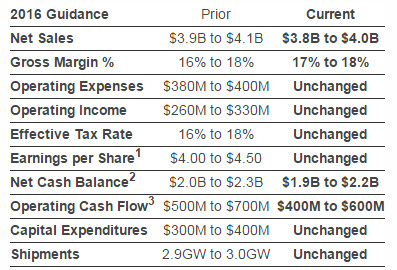