FuJian Goomax Group Set Up a Branch in Tokyo

Since the earthquake, there's been an upsurge of solar energy in Japan, and many enterprises have got into the solar market to build large-scale solar power plants. Moreover, the 32nd Olympic Games will be held in Tokyo during the year of 2020, which will contribute to an upsurge of infrastructure and urban construction. All of these will bring many business opportunities to the Chinese enterprises. Therefore Goomax Group, a large aluminum and stainless steel production enterprise in Xiamen, has formally set up a branch in Japan.
On Feb 25th, a celebration reception for establishment of Japan Branch of Goomax Group was held in Tokyo. More than 200 guests attended the reception, including Goomax Group Chairman Chen Dongsheng, Goomax Group General Manager Huang Hong Weiwen, Chinese Ambassador to Embassy of China in Japan Wang Shufan, the president of Fujian Economy and Culture Promotion Association in Japan Chen Xi, the president of Yokohama Branch of Fujian Economy and Culture Promotion Association in Japan Chen Shengfang.
Being the vice-president of Fujian Economy and Culture Promotion Association in Japan, Chen Dongsheng introduced in the speech that Japan branch is a second overseas branch of Goomax after its 1st branch in Philippines, which is a milestone of Goomax Group. In order to achieve the global development strategy, Goomax Group plans to set up more branches in USA, Australia, Burma, Indonesia and Germany and other regions. This year, Goomax Group will launch a 1.5 billion Yuan investment project to establish a large-scale production base with 4 billion annual outputs in Jiangsu.
Last February, Chen Dongsheng led the staff of Goomax Group to attend the solar exhibition in Japan. He was deeply impressed by the development potential in Japan. Moreover the 32nd Olympic Games will be held in Tokyo in 2020, he believes that there will be a consumption peak in building materials industry. Thus to set up a branch in Japan came into his mind. After back to China, Chen Dongsheng had meetings with the shareholders to conduct a feasibility analysis. Most of the shareholders agreed, and it was soon put on agenda to establish a Japanese branch. After Chen's multiple trips between Xiamen and Tokyo, also with the help of Fujian Economy and Culture Promotion Association in Japan, procedures such as branch registration and business license application were fulfilled in January 2015.
Being the director of Fujian Economy and Culture Promotion Association in Japan, Huang Hong Weiwen introduced that Goomax Group was founded in 1995 and it is a professional aluminum profile and stainless steel manufacturer. Goomax Group has three production bases located in Nan'an of Fujian, and Foshan of Guangdong, five metal processing plants, with about 200000 square meters and more than 1000 staff. It also set up about 19 sales companies in China, Japan and Philippines. Xiamen Goomax Energy Technology Co., Ltd. was established in 2013, which is an energy high-tech enterprise. With advanced technical equipments and independent R&D ability, Xiamen Goomax specializes in the R&D, production and sales of solar mounting systems. With 400MW annual capacity currently, Goomax products have been exported to more than 10 countries and regions, and become one of the biggest solar mounting system exporters in China. Especially for Japan market, Goomax exports more than 15MW ground mounting system monthly.
The Japan branch will not only actively expand the solar mounting system business and provide all kinds of service and technical support, but also expand the business of stainless steel and aluminum profile.
Chinese Ambassador to Japan Embassy consular Wang Shufan highly praised the positive efforts and contributions made by Goomax Group to promote the development of bilateral economy and trade between China and Japan, and he expects Goomax Group will continue to play an active role in deepening the bilateral economy and trade cooperation. 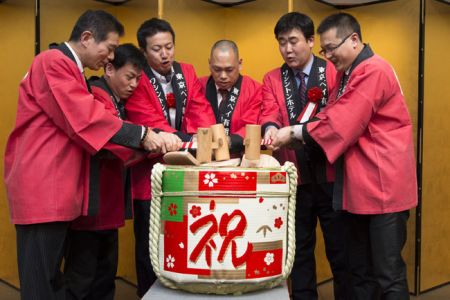