Xiamen Grace Solar Technology Co., Ltd, which has been ploughing the photovoltaic field for many years. In fact, more and more power station investors pay more attention to the income of the whole life cycle of power station, and the increase of power generation brought by the tracking system far exceeds the investment cost in the early stage. However, once the products fails, the increased revenue will be "eaten up", so "safe" and "reliable" are important to tracking system.
After in-depth analysis of the advantages and disadvantages of the existing mainstream tracking system, Grace Solar launched new tracking system to meet the market demand -- GS-light Intelligent linkage tracking system. Mr. Guirong Han, R&D director of Grace Solar, introduces that the new tracking system, which is between large linkage and independent drive, adopts a single-row two linkage arrangement, driven by rotation. It uses not only the astronomical algorithms and position sensing closed-loop control as its control algorithms, but also the AI intelligent algorithm to maximize power generation. 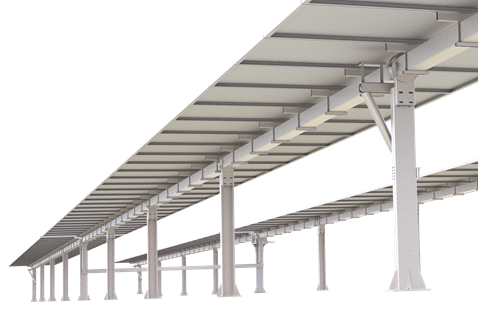 GS-light Intelligent linkage tracking system
In an ordinary single-row single-axis tracking system, one single motor can drive 2 to 3 strings, while the single motor of GS-light Intelligent linkage tracking system can drive 4 to 6 strings. More than that, it embraces a lower failure rate, with fewer electronic control systems and drive equipment. After passing the RWDI wind tunnel test, Grace Solar in terms of structural design further consolidated the dynamic stability of the tracking system under extreme wind load conditions by changing the aerodynamic characteristics of the structure and increasing the structural damping ratio, the safety of the tracker ensured. In addition, it uses a larger section and high-strength main beam, which has better stiffness, higher natural vibration frequency, and is safer and more reliable.
Besides the precise design, Grace Solar carries out strict quality control on the manufacturing process. The pass rate of key components is controlled at 100%, and the control system is 100% tested before leaving factory. "The above measures ensure the high quality of the product, and its annual utilization efficiency is over 98%. We also provide on-site guidance and commissioning manuals during the installation stage, as well as consulting, operation and maintenance services during the whole life cycle."
In terms of increasing power generation, Grace Solar adjusts the running status of tracker in time for different climate scenarios through AI intelligent algorithm. According to calculations, the comprehensive power generation of the power station can be increased by 1% on the basis of the traditional tracking system with AI intelligent algorithms, and the power generation advantage is more obvious in the special scenarios, like Agricultural PV plant and Aquacultural PV plant.
Considering the needs of different customers, GS-light Intelligent linkage tracking system targeted the three material combinations of "hot-dip galvanized steel, aluminum-magnesium-zinc plate and aluminum profile" according to the different positions and stress states of the tracker. It reduces the overall cost of the system while ensuring the safety of the system. 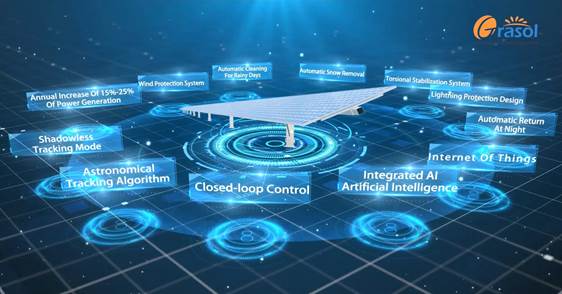 Core Competency of GS-light Intelligent linkage tracking system
According to Mr. Han, GS-light Intelligent linkage tracking system is currently undergoing final mass production qualification, production equipment debugging and certification, is expected to achieve mass production in early 2021, with a planned production capacity of 2GW per year. And Grace Solar is quite confident with the market demand for this system. From a global perspective, the demand for tracking system in mature markets such as the United States, Spain, and Australia continues to be strong, and is also growing in emerging markets such as Brazil, Mexico, Chile and Argentina, which are also key markets for Grace Solar. There have been orders for about 300MW of GS-light Intelligent linkage tracking system till now, and 1GW is in the preliminary design stage.
As far as the market in China is concerned, although the current market share of tracking system is not satisfactory, however, there is no denying that the demand is increasing year by year. With the apporching of the full-price grid for PV, the application of double-sided modules and high-power modules will drive the market share of tracker to further increase. It is estimated that in 2021, the market share of double-sided components will reach about 60%, and the proportion of 182/210 large-size silicon wafers will also increase to over 30%. GS-light Intelligent linkage tracking system embraces the capacity to match high-power large-size components, which demand is strong.
A safe, reliable and efficient tracking system requires certain technical support from design to quality control, which further demonstrates "soft power" of Grace Solar. It is understood that the investment of Grace Solar in R&D in recent years has remained at about 5% of the output value. Grace Solar has a team of highly sophisticated engineers, which is divided into several professional teams according to the technical direction of fixed mounting system, tracking system, floating system and has sufficient research and technical reserves for the world's major design standards, environmental requirements, entry threshold and other conditions.
From technical reserves to R&D of new product and production capacity guarantee, Grace Solar has worked on multiple dimensions to improve the competitiveness of the company. With regard to the distribution of domestic and overseas market in the post-epidemic era, Mr. Han says, "we will actively respond to the 'dual cycle' strategy of our country, stabilize the external cycle of the overseas market, and explore the internal cycle of the domestic market. In the later stage, we will increase product promotion efforts globally, and strive to promote the efficient and reliable tracking support to more photovoltaic projects, so as to help the global PV grid to achieve parity."
Fuente: Grace Solar
Perfiles en ENF para compañías mencionadas en este artículo