- High order intake in the amount of € 144.1 million
- Order backlog at € 134.0 million as of September 30, 2016
- Sales still at low level in the period under review
- Operating cash flow positive at € 11.6 million
- Restructuring income results in positive net profit
- Bond restructuring and cash capital increase successfully concluded
The Singulus Technologies AG reports an order intake of € 144.1 million for the first 9 months of the business year 2016 (previous year: € 84.4 million) and is thus significantly above the level of the comparable prior-year period. In the quarter under review the order intake came to € 12.6 million (previous year: € 11.3 million). As of September 30, 2016, the order backlog amounted to € 134.0 million and is thus also considerably above the prior-year level as of September 30, 2015 amounting to € 40.7 million.
In the course of the business year 2016 Singulus Technologies was able to conclude a major order with the Chinese state-owned enterprise China National Building Materials (CNBM). This includes three contracts each for two subsidiaries of the Group for the delivery of machines for the set-up of two independent production sites for the manufacturing of CIGS solar modules. The order volume for the two production sites combined totals approximately € 110.0 million.
Due to the delay in the order placement and the resulting delayed project start, the financial key figures of the interim report of the Singulus Technologies AG as of September 30, 2016 were strongly impacted. In the third quarter, Singulus Technologies received the first prepayments for the three delivery contracts for the first of the two production sites. Accordingly, the production of the machines for this site has already been started and the first revenues will be realized during the further course of the business year. However, the major part of sales will only be realized in 2017.
During the first nine months of the current business year, Singulus Technologies recorded sales of € 36.7 million, which was thus below the level of the prior-year period in the amount of € 57.7 million. Sales in the third quarter came to € 12.1 million (previous year: € 28.5 million). The loss on an operating basis (EBIT) amounts to € -14.7 million for the first nine months of the current business year (previous year: € -13.9 million).
In connection with the bond restructuring, a restructuring income in the amount of € 41.2 million was realized in June 2016. The income was reported as financial income. From this a financial result of € 38.4 million was recognized. The operating cash flow was positive at € 11.6 million during the first nine months (previous year: € -8.7 million). The available liquid funds increased by € 8.5 million to € 27.5 million as of the end of the third quarter.
In the past couple of weeks, Singulus Technologies has to a large extent concluded the restructuring of the corporate bond due in 2017. All of the resolutions passed by the second bondholder meeting and the Extraordinary General Meeting were successfully implemented by the company.
Outlook for the business year 2016
The company had published its sales forecast in the amount of around € 68 to 78 million for the current business year on September 19, 2016. During the first nine months the company realized sales in the amount of € 36.7 million. The level of sales in the fourth quarter 2016 is mainly impacted by the pending realization of sales of two major solar projects. The corresponding machines were already constructed and delivered in prior periods. However, the assembly as well as the commissioning is still pending due to delays on the customer side. If the final realization of sales of these two projects is unexpectedly delayed to the following business year, the company will report on this in a timely manner. In addition, the delayed start of the large order from CNBM and the resulting deferral of parts of sales into the business year 2017 impacts the respective financial results.
For the fiscal year 2017, Singulus Technologies expects a continuing favorable trend of the demand for machinery for the production of solar cells. In this case, according to the company’s assessment, this improvement could result in a doubling of the sales level achieved in the business year 2016. 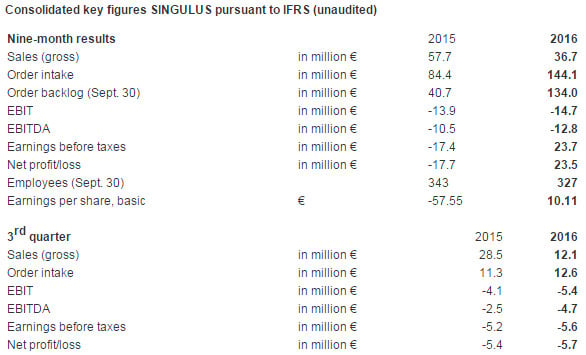