First Solar, Inc. today announced financial results for the first quarter of 2016. Net sales were $848 million in the quarter, a decrease of $94 million from the fourth quarter of 2015. The decrease in net sales from the prior quarter was primarily due to the timing of systems revenue recognition across multiple projects, partially offset by higher revenue from the Desert Stateline project. In addition, net sales from module plus offerings decreased versus the fourth quarter.
- Net sales of $848 million
- Earnings per share of $1.66
- Cash and marketable securities of $1.9 billion, net cash of $1.6 billion
- 2016 EPS guidance range updated to $4.10 to $4.50
The increase in Desert Stateline revenue in the first quarter resulted from an amendment to the original sale agreement with Southern Company to include an additional 15% interest in the project. This amendment did not impact expected full year 2016 earnings, but did accelerate the timing of certain earnings, relative to prior expectations, from the second half of the year to the first quarter.
The Company reported first quarter earnings per share of $1.66, compared to $1.60 in the prior quarter. The increase in net income versus the fourth quarter resulted from higher Desert Stateline revenue, systems cost improvements and a one-time gain on the sale of certain restricted investments. These items were partially offset by an increase in tax expense.
Cash and marketable securities at the end of the first quarter increased to $1.9 billion. Cash flows from operations were $50 million in the first quarter.
"Our first quarter results represent a very strong start to 2016," said Jim Hughes, CEO of First Solar. "The sale of additional economic interests in our Stateline project further strengthens our relationship with a strategic business partner, and the transaction provides greater flexibility for future dropdowns to 8point3. We continue to operate our business with a disciplined approach and are focused on achieving our 2016 objectives communicated at our recent Analyst Day."
The Company raised the low end of its 2016 earnings per share guidance to $4.10 and updated other forecasted financial items as follows: 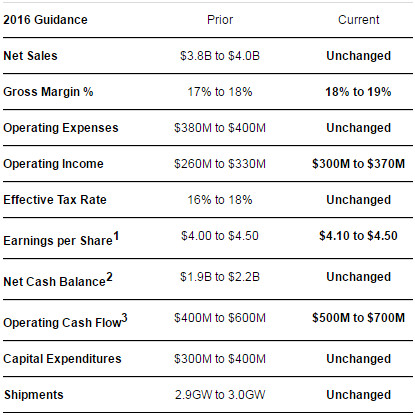