- Revenue of $1.28 billion down 18% from $1.56 billion in 2014
- Sold 72.8MW of projects
- Total external solar module shipments were 1.6GW
- Gross margin increased to 14.7% from 13.4% in 2014
- Operating income grew 257% to $29.3 million from $8.2 million in 2014
- Net loss attributable to holders of ordinary shares narrowed significantly to $5.1 million from $33.6 million in 2014
"We are proud that we delivered on our strategy in 2015, making significant progress in transforming ReneSola from a solar product manufacturer to a multi-faceted participant across the green energy value chain," commented Mr. Xianshou Li, ReneSola's Chief Executive Officer. "Our full-year 2015 results demonstrated the wisdom of our strategy. We increased gross margin for the third straight year, and reduced operating expenses on an absolute basis for the second straight year. This resulted in operating profit tripling from 2014, and a significantly reduced net loss. Revenue declined somewhat, but this was mainly due to reduced shipments to external customers, as we strategically directed more shipments to our own downstream projects. Our solid P&L performance enabled a reduction in debt of $59 million. Effective management of or working capital and improved balance sheet strength remains a key focus for our team and a long-term commitment to our shareholders. We expect to pay down more debt in the quarters ahead."
Li continued, "We enter 2016 on a high note as a global leader across the solar value chain. We are profitable since Q3 2015, with over 600MW of projects under development, and a burgeoning new business in LED distribution. We remain positive on our downstream strategy and excited about the business opportunities ahead of us. We continue to believe ReneSola can achieve an attractive growth rate by developing solar projects in attractive markets, and our entire team remains focused on building a great foundation to increase shareholder value in 2016 and beyond."
Fourth Quarter 2015 Financial Results
Revenue of $296.4 million was down 19.5% q/q and 23.4% y/y and slightly exceeded guidance of $275-$295 million. The revenue decline reflects lower ASP and lower shipments to external customers.
Gross profit of $47.5 million was down 20.0% q/q and 7.3% y/y. Gross margin expanded to 16.0% when compared to the fourth quarter of 2014, but was down slightly sequentially. The margin decline in the quarter was attributable to the cost associated with the annual maintenance in our polysilicon plant, partially offset by lower production cost and the above-corporate-average gross margin generated from our project sales in the quarter. Gross margin in Q4 2015 was below guidance of 17-18% as a result of the change in the timing of the annual maintenance in our polysilicon plant which was moved to Q4 2015 from Q1 2016.
Operating expenses of $30.5 million were 10.3% of revenue, down from 13.0% in Q3 of 2015 and from 13.8% in Q4 of 2014.
Operating income was $16.9 million, compared to operating income of $11.4million in Q3 of 2015 and operating loss of $2.2 million in Q4 of 2014. Operating margin expanded sequentially to 5.7% from 3.1% in Q3 of 2015.
Non-operating expenses of $9.2 million include net interest expense of $9.8 million and loss on derivative of $1.2 million, offset by foreign exchange gains of $2.1 million.
Net income was $6.7 million, which compares to a net income of $8.6 million in Q3 of 2015 and a net loss of $8.1 million in the prior-year period. Earnings per ADS were $0.07.
Balance Sheet, Liquidity and Capital Resources
ReneSola continued to closely manage working capital. The Company had cash and equivalents (including restricted cash) of $178 million as of year-end. During the quarter, the Company used operating cash flow to reduce total debt by $16.8 million, to $734 million. The Company had approximately $26.1 million in convertible bonds outstanding as of December 31, but repurchased $20.5 million more subsequent to the end of the quarter. Note that the holders of the remaining $5.6 million of convertible bonds can exercise the put options through expiration before March 14, 2016.
Full Year 2015 Financial Results
Revenue of $1.28 billion was down 17.9% y/y.
Gross profit of $187.9 million was down 10.2% y/y. Gross margin expanded to 14.7% from 13.4% in 2014.
Operating expenses were $158.6 million, or 12.4% of revenue, compared to $201.1 million, or 12.9% in 2014.
Operating income was $29.3 million, or 2.3% of revenue, compared to $8.2 million, or 0.5% in 2014.
Non-operating expenses of $33.7 million include net interest expense of $40.5 million, foreign exchange loss of $2.1 million and loss on derivative of $6.0 million offset by gains on repurchase of convertible bonds of $13.7 million in 2015.
Net loss was $5.1 million, which compares to net loss of $33.6 million in 2014. Net loss per ADS was $0.05.
Fourth Quarter Operating Highlights
Since disclosing its strategic shift to project development at the start of 2015, the Company has focused its efforts on developing, operating and selling high-quality solar power projects. Activity is centered on building a pipeline of distributed generation and utility-scale projects in attractive geographies worldwide. In the fourth quarter the Company continued to execute on the monetization phase of the development cycle.
Project Sales
The Company recognized revenue of $33.8 million from the sale of solar power projects. The revenue was comprised of new sales in the quarter of three projects representing 18.0 MW of generating capacity. The sales generated gross margins above the Company average.

Operating Assets
The company owns and operates four solar power-producing projects it developed earlier in the decade. The Company considers the operating projects to be economically attractive, because they produce a steady stream of high margin recurring revenue. Currently the Company is holding its operating assets for eventual sale, since it is pursuing a build-operate-transfer model. The Company is currently negotiating the sale of its two projects in Bulgaria, and expects to reach final agreement in the near future.

Project Pipeline
The company currently has 641MW of projects in various stages of development. The geographic distribution of projects is outlined in the table below. 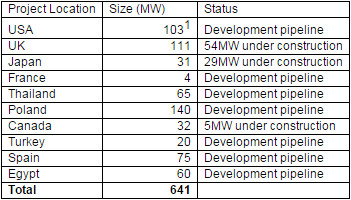 The Company continues to fully utilize its capacity by providing high quality products with lower cost to select customers. The Company considers its competitive advantages to be improving conversion efficiency and supply chain management.
During the fourth quarter, total solar module shipments were 373.2 MW, representing a decrease of 8.0% from Q3 2015. Total wafer shipments were 270.3MW, down 20.9% q/q and up 5.6% y/y.
In 2015, total solar module shipments were 1.60GW, representing a decrease of 18.9% from 2014. Total wafer shipments were 1.09GW, up 28.7% y/y.
LED
During the fourth quarter, ReneSola's LED business reached revenue of $4.9 million, up from $3.6 million in Q3 2015, and delivered gross margin of over 30%.
The energy efficiency market is a very large and growing market, and LED lighting is a critical element. A key strategic focus of the Company is to grow its share of the high-growth LED market by expanding its world-wide distribution channels.
Outlook
For Q1 2016, the Company expects revenue in the range of $260 to $270 million and gross margin to be around 17%.
For full year 2016, the Company expects revenue in the range of $1.0 to $1.2 billion. The revenue outlook reflects continued shift of OEM module production from external sales and toward proprietary project development to pursue high profit.
Fuente: ReneSola
Perfiles en ENF para compañías mencionadas en este artículo